When I happened across this image on Pinterest I knew I had found the most wonderful property for Wanderlust Wednesday.  I hope you are transported to Africa with lustful desire as I am…

WHERE THE ELEPHANTS ROAM: SANDIBE SAFARI LODGE BY FOX BROWNE AND MICHAELIS BOYD After a 20-minute flight on a light aircraft, guests arrive at the airstrip. From the plane, they will already have seen the Okavango River flowing from Angola, creating a swath of verdant grasslands through Botswana’s sandy desert plains. Then, on a half-hour drive to the final destination, guests might glimpse herds of antelope and inhale the earthy, nutty scents of the thickly wooded vegetation all around. On arrival, guests walk between wild palms and tall fig trees until, suddenly,  an astonishing structure appears. Curved like a giant armadillo, seamlessly part of its environment, this is Sandibe Okavango Safari Lodge in the Okavango Delta, home to one Africa’s densest and most diverse wildlife populations. The site—highly desirable for its superb position and plethora of mammal, reptile, and bird life—has been reimagined by the architecture firm Michaelis Boyd Associates, working with Nicholas Plewman Architects, and the interiors firm Fox Browne Creative, all collaborating to replace an outdated Sandibe camp owned by &Beyond, an ecologically conscious travel brand with 33 camps in Africa and South Asia.

Nicholas Plewman designed the original Sandibe for &Beyond, then known as Conservation Corporation Africa, after it was granted a concession by the Botswana government in 1997. But concessions last for only 15 years, so the company always knew it would have to bid again. In the meantime, because the Okavango Delta had been declared a UNESCO World Heritage site, all the ground rules had changed. Building materials would have to be biodegradable, and 70 percent of electricity would have to come from solar power and other renewable sources. The new rules also meant that the existing buildings, consisting mostly of concrete,  had to be deconstructed with every last scrap of non-biodegradable material removed from the delta—a process complicated by the fact that everything had to leave before the start of the intense rainy season. But being compelled to start from scratch was an opportunity to “catch up on worldwide design improvements for hotels and safari lodges, ” Alex Michaelis says. He and Tim Boyd  had previously designed a house in London for one of the owners of &Beyond and had also renovated its Kichwa Tembo camp in Kenya—another collaboration with Plewman, Debra Fox, and her husband, Chris Browne.

Sandibe allowed the team to entirely reconceive the safari lodge concept, which tends toward tented structures with dark interiors. The foursome asked themselves: If we just put all convention aside and imagined a design arising organically from this site, what could we build? Their answer centered on a main lodge derived from the shape of a rare native armadillo, the pangolin. Shingles and curved beams suggest its scales and ribs, as the 11, 500-square-foot building,  open at the sides, both curls into itself and embraces the forest. The 12 guest bungalows are constructed along the same principles. Browne, who worked as &Beyond’s creative director before he and his wife started their firm, describes the aesthetic as “a cocktail of timber.” He estimates that 90 percent of the project consists of wood. Monkeys scamper across roofs shingled in cedar shipped all the way from Canada. “Because the quality is so good, ” he says. Decks are a Brazilian hardwood that requires no maintenance. Inside, South African pine was used for walls, Australian eucalyptus for floors.

The bungalows are raised on posts to allow views over the plains with the animals parading by. Only the occasional naughty elephant from the herds ambling past manages to cross the protective channel of water and drink from the plunge pools set into the decks outside. Each bungalow is also screened by a stand of reeds. “It’s very private and very serene, ” Michaelis says. Inside, the sleeping and bathing areas are open-plan, the palette’s neutral tones with bronze accents deliberately calm and understated so as not to compete with the extraordinary architecture. The only two fabric colors are taupe and creamy white. Where possible, elements from the original camp were recycled. For example, Zambian hardwood from  support columns was used for the double sink vanities. Old horn door handles and wooden cowbells serve as accessories.

In contrast to the elevated bungalows, the main lodge hugs the ground. To one side of the entry is the restaurant. To the other side, up a half-flight of stairs, is an extraordinary bar contoured to wrap around into the lounge. “People are out most of the day on safari, so the public area really comes into play at night, ” Michaelis says. Light filters gently through the pendant fixtures’ dome shades, essentially baskets turned upside down.

Outside the armadillo structure, the floodplain’s long grass sways softly, divided into tiny islands by the river pushing through the delta. Birds call. Crocodiles float almost unseen. Buffalo, wildebeests, giraffes, leopards, hyenas, lions, and rhinoceroses appear. Sandibe lies quietly among them, its wood already turning a pale gray that blends into the trees.

<<See more from the July 2015 issue of Interior Design 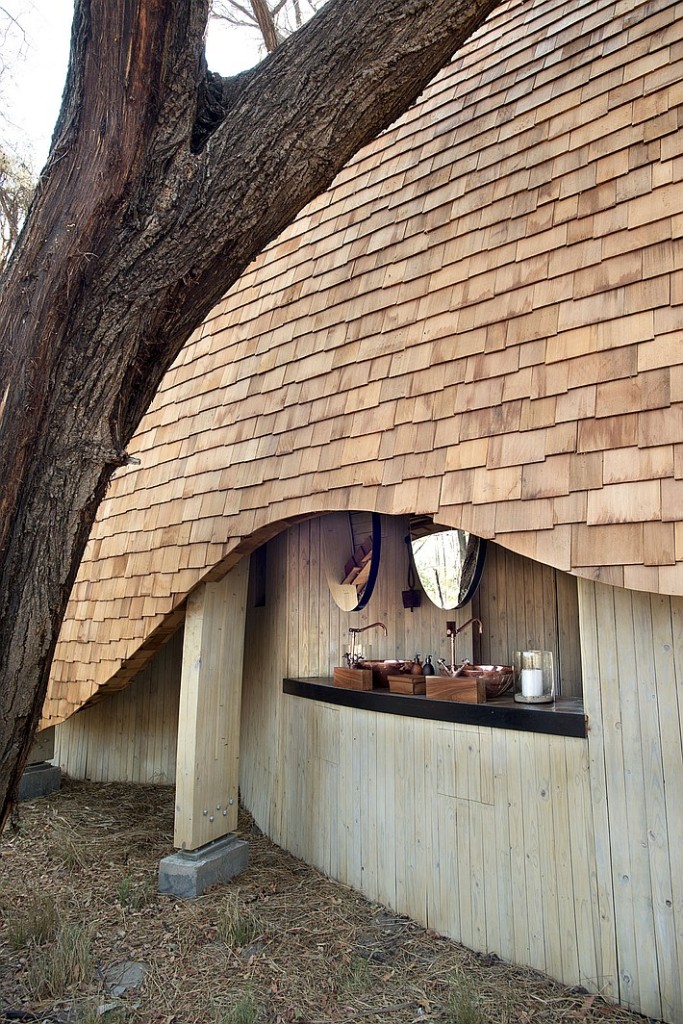 Who wants to join me for an African adventure?