It is no secret that I am in a constant state of wanderlust! This recent feature in WSJ travel section caught my eye.

This chic and well styled hotel has certainly been added to my long and ever-growing bucket list.

Enjoy a look at the Fendi Hotel Rome. GREEN ROOM |The renovation of Palazzo Fendi included the transformation of its third floor into a private salon for the use of VIP clients, dubbed Palazzo Privé. The sitting room of the Palazzo Privé apartment features a Bruno Mathsson lounge chair and club chairs by Axel Vervoordt. It is separated from the dining area by a custom Dimore Studio lacquered metal and glass bookcase designed in collaboration with Fendi for Design Miami in 2014. PHOTOGRAPHY BY MATTHIEU SALVAING FOR WSJ. MAGAZINE NEARLY A CENTURY AGO,  enterprising young newlyweds named Adele and Edoardo Fendi began selling hand-crafted leather goods and furs from a small shop on Rome’s Via del Plebiscito. Not only did they soon expand their business, but they had five daughters, Alda, Anna, Carla, Franca and Paola, who grew up playing in the atelier with accessories instead of toys. Today, the label has grown to encompass a small empire, producing ready-to-wear that ranges from haute peasant dresses to futuristic rompers, furs, bags and the Fendi Casa line of furniture. And now the Fendi imprimatur can be found on some of Rome’s most recognizable structures thanks to a trio of restoration initiatives.

Unlike most Italian luxury brands, which are based in the fashion-industrial metropolis of Milan, Fendi has always stayed true to Rome. This remained the case even after French luxury group LVMH acquired a 51 percent stake in the house in 2001. “Fendi has a very Roman point of view, ” says Pietro Beccari,  who was named the brand’s chairman and chief executive officer in 2012 and is the catalyst for the architectural ventures. “Beyond Italian, it is Roman. The Roman nuance is important. Rome has an aesthetic sense linked to beauty.”

And those ties have only strengthened this winter, when Fendi opened a jewel-box-size hotel—and its largest store ever—on the site of its historic Palazzo Fendi, on Rome’s Via Condotti. There, the most ardent clients can immerse themselves in the house’s signature opulence, from the red Lepanto marble walls to the Gio Ponti furniture. But first, Fendi had to move its corporate headquarters from this historic building to another, taking over the Palazzo della Civiltà Italiana, which was erected under Fascist dictator Benito Mussolini’s rule in the EUR district, in the city’s outskirts. Known to Romans as the Colosseo Quadrato, or Square Coliseum, for the arches that punctuate its imposing edifice, this rationalist-meets-neoclassical behemoth had lain in near ruin for 40 years, with no systems for running water, electricity or heat. (The dictator lost his stranglehold on power before his architectural masterpiece could ever be used. It was intended for the international expo of 1942, which was derailed by the outbreak of World War II.) Where others failed, Fendi succeeded, opening the building as its new official headquarters last October with much fanfare following an 18-month renovation by architect Marco Costanzi. The first-floor galleries were thrown open to the public for the first time, with an exhibition on the history of the building, including photographs by Karl Lagerfeld and Italian artist Franco Fontana; a specially commissioned light show by artist Mario Nanni illuminated the arched facade’s six stories. 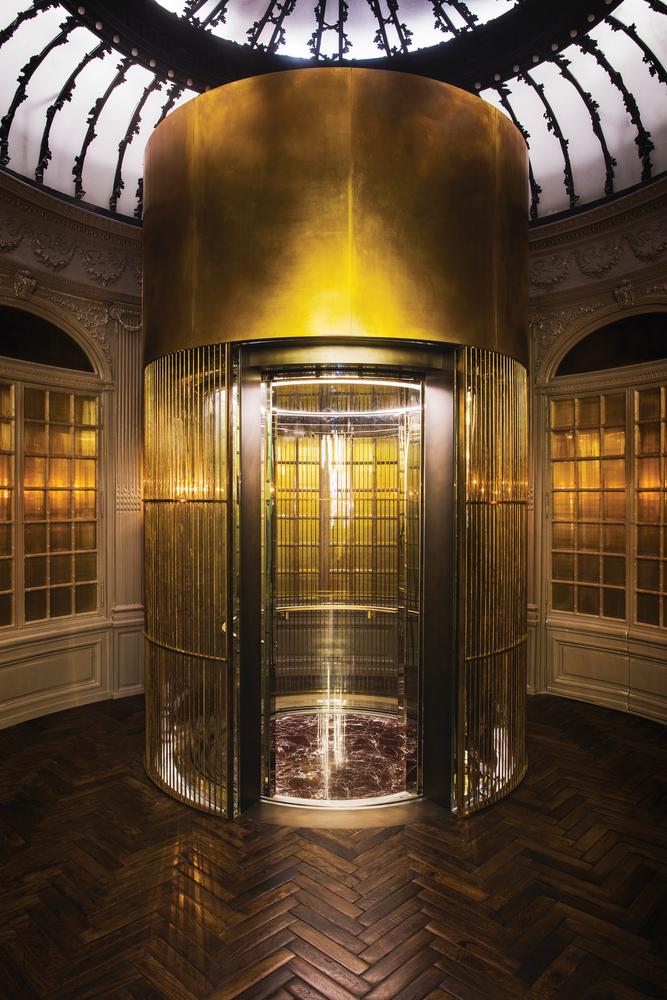 BEAM ME UP | A glass-and-bronze elevator is just one dramatic feature of the boutique, Fendi’s largest yet, designed by Gwenael Nicolas. Photo: Matthieu Salvaing for WSJ. Magazine

Nearly simultaneously, the ornate 18th-century Trevi Fountain reopened after a Fendi-sponsored renovation—involving work costing some $2 million. Crowds of tourists once again flocked to the landmark to toss coins over their shoulders into its waters, thus ensuring their return trips to Rome, according to legend. Besides a pristine facade and an extensive new lighting system, the fountain now displays the Fendi name on a plaque on one side.

The challenge then remained to reimagine the Palazzo Fendi, a 17th-century manse that was modified in the 1900s into a home for the aristocratic Boncompagni family before becoming Fendi’s headquarters in 2004. (One wing was sliced off in the 1920s for a city tramway, leaving the marble structure shaped like an asymmetrical slice of pie with a dramatically porticoed facade, which Fendi takes as one of its brand hallmarks. “Our aesthetic sense is quite geometric, ” says Beccari, noting his fondness for the unusual edifice and for the Palazzo della Civiltà Italiana.)

For Palazzo Fendi’s ambitious renovation, which was completed in just 11 months, Beccari looked to three separate architecture firms, each of which led distinct areas. Japan-based interiors specialist Gwenael Nicolas, who has designed several retail spaces for the house, oversaw the establishment of the massive Fendi store at street level. The space features a sweeping Lepanto marble staircase and a circular glass-and-bronze elevator. Also on display are modern and contemporary pieces from the Fendi collection of art, including a painting by Italian avant-garde artist Agostino Bonalumi and a mirrored “Moon Ball” sculpture by Swiss conceptualist Not Vital, as well as a piece by the extravagant Brazilian design duo the Campana brothers. On the floor above, the influential Milan-based firm Dimore Studio envisioned Palazzo Privé, a lavish apartment for the use of VIP clients for private fittings and events, while Costanzi designed the boutique hotel, dubbed the Fendi Private Suites. Meanwhile, on the roof will be the first Italian outpost of the London-based Japanese restaurant Zuma. “Rome misses a global well-known restaurant, ” says Beccari. “Zuma brings to Rome a certain caliber that it lacks completely.”

“This is not just a hotel, a restaurant, an apartment and a shop, ” Beccari continues. “It’s our incarnation of our sense of aesthetics. It’s also a game changer for us, because I believe that visitors will discover what we like and they will like it too.” 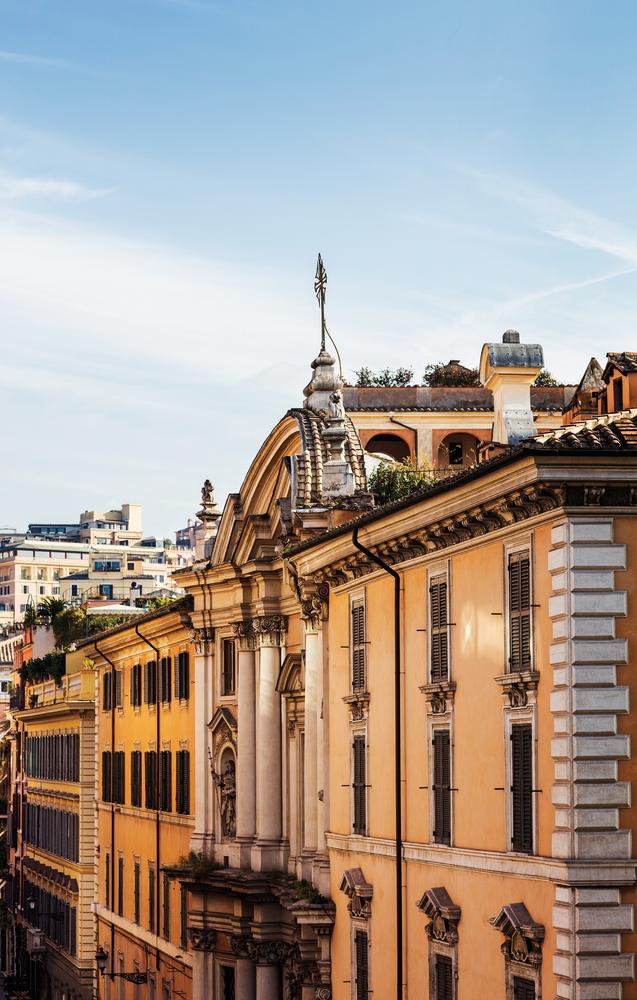 A sweeping view of Rome’s Via Condotti as seen from the hotel. On the roof will be an outpost of London’s Zuma restaurant. Photo: Matthieu Salvaing for WSJ. Magazine

The hotel is deliberately intimate, with only seven rooms, each with a slightly different design that incorporates Fendi Casa furniture (which is itself a nearly $90 million business, according to Beccari). As with the boutique below, artwork and statement design pieces are interwoven throughout, including chandeliers by Lindsey Adelman and a sculpture by Studio Formafantasma, an Italian design duo made up of Andrea Trimarchi and Simone Farresin. (Room rates range from $770 to $1, 900 per night.) While Costanzi says he wanted to create a template that could be applied to future Fendi hotels, Beccari says that at present Fendi has no plans to dig deeper into the hospitality market. “Obviously, it’s a good way to start, being small, ” he says. “But honestly, this project is more about creating image. We want to make sure that people leave with a better idea of Fendi than when they arrived.”

Discreet references to house motifs are on display throughout, including black-and-white photographs of Roman fountains by designer Karl Lagerfeld, who was first employed by the Fendi family in 1965. “Karl is fundamental to the brand, ” says Beccari of Lagerfeld, who designs fur and women’s ready-to-wear while also devoting his frenetic creative energy to Chanel and his own Karl Lagerfeld line. The synergy between the German-born Lagerfeld and designer Silvia Venturini Fendi (the daughter of Anna Fendi), who works on accessories, menswear and the Fendi children’s line, is vital, says Beccari, though neither directly contributed to Fendi’s recent architectural activities.

“Karl has known Silvia since she was small, ” says Beccari. “Their relationship makes Fendi very special. There is complicity between the two. Karl has so many projects, and Silvia knows the DNA of the family. She knows what is Fendi and what isn’t. Both of them know exactly what belongs to the Fendi aesthetic.”

“The hotel embodies the spirit of Rome, which is very central to my family and the Fendi brand. For me it is all about that unique tension between past and future, old and new, history and innovation, ” says Silvia Venturini Fendi. “The house codes carry through to each of our endeavors, interpreted different ways. You will find various elements in the hotel that recall certain themes often found on our runway—geometry, dualism, manipulation of materials, color blocking and, of course, fur.”

Perhaps the most adventurous expression of the Fendi aesthetic can be found in the extravagant three-room apartment designed by Dimore Studio’s Emiliano Salci and Britt Moran. Fendi says, “We have a lot of points in common with Dimore Studio: We share a similar creative approach.”

“We wanted to maintain this old Roman palazzo spirit, ” Moran says of the graciously proportioned floor, which covers 1, 080 square feet. “We like to create a lot of different layers in our spaces, something that is very rich, not minimal.” To that end, they maintained the original wood plank  floors and the plaster wall work. The latter was painted in an unexpected hue of verdant blue that Moran himself has trouble naming. “It’s kind of our trademark to choose an unusual color, ” he says.

Guests enter a vestibule where a dramatic chandelier hangs overhead, like a geometric grid across the ceiling (one of the custom pieces that Dimore Studio created for Fendi’s booth at 2014’s Design Miami fair). The apartment’s large dining and living room space is another study in the unexpected. A towering metal bookcase that features colorful handblown cathedral glass splits the room in two and accentuates the soaring ceiling. “Given the clientele, we wanted to give the space a collection of objects that is international but that will still seem Italian, ” says Moran. He and Salci have peppered the space with classic Italian design works, from a sleek daybed by modernist Gio Ponti to Murano glass chandeliers by Venini and art by Lucio Fontana and Nunzio. Adds Moran, “It is a mix of old and new. This apartment is meant to be a conversation piece.”

Such buzz, it seems, is what Fendi is seeking, yet shoring up the brand’s Roman heritage with spectacular architectural maneuvers gives physical substance to its message in a way that ephemeral digital chatter cannot match. “It’s the incarnation of our aesthetic, ” Beccari says. “I believe that people like to see on Instagram your real value, what you do, ” he says. “I think Instagram and the digital age brought a lot of transparency to the world of luxury. You cannot hide anymore. People like to plunge into a brand. I believe offering a lifestyle is offering them the occasion to live the brand to the fullest extent.

“People like to buy into a set of values a brand represents, ” he adds. “Some people already go home and watch TV on a Fendi sofa.” Now they can also go to Rome and sleep in a Fendi hotel.