Atlanta Homes & Lifestyles always has the most amazing projects.

This cool Costa Rican escape has me longing for the tropics.

On Costa Rica’s Guanacaste coast, the charming beach town of Las Catalinas beckons. Designer Beth Webb takes us into one of its most inviting residences. A mirror from Bungalow Classic takes center stage in the pool cabana. Relaxation beckons at this seaside retreat. 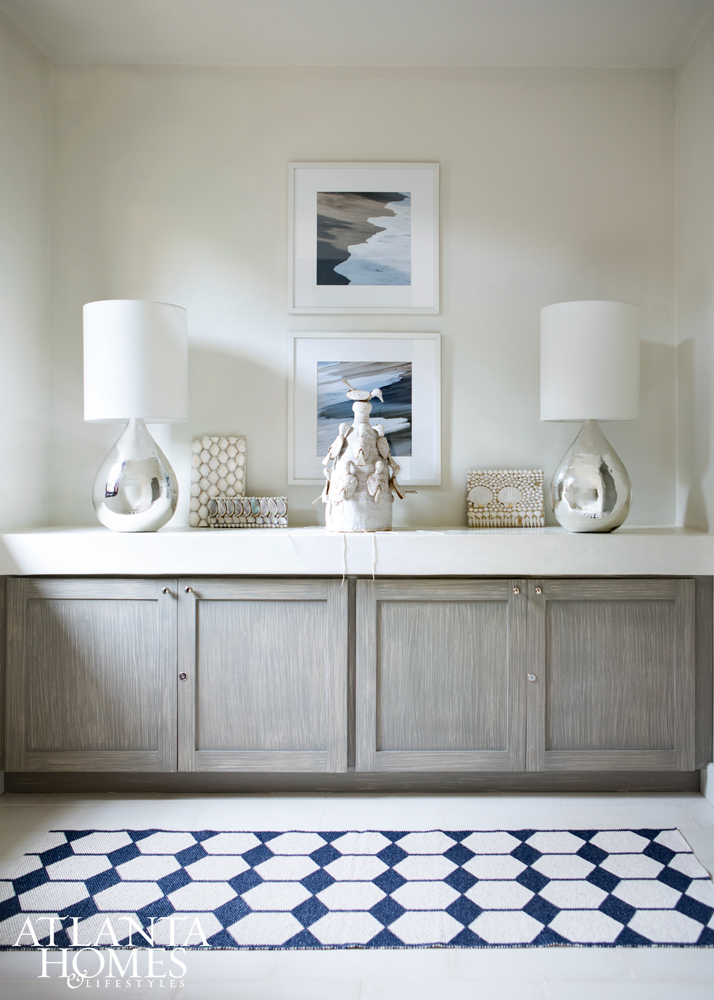 Limewashed cabinets with a poured-concrete top provide storage for the owners of this residence, called Casa Mar y Sol. Perhaps the most spacious room in the house is the master bedroom, which boasts two separate walk-out terraces. The vintage cane armchair is from Mexico City; the rug is Dash & Albert. Brighton table lamps, Serena & Lily. Sunbrella draperies withstand the sun and other elements in the guest master bedroom. In the guest master bedroom, an Arteriors lamp and Serena & Lily mirror embrace the tropical environs. The lower-level children’s den boasts plenty of seating for on- and offline play. Sectional and ottoman, Kingsley Bate through Logan Gardens. Art, Wisteria. ultimately, the design directive was to keep the palette clean, bright and breezy—and within the context of its tropical environs. Architecturally dense to preserve as much natural terrain as possible, Las Catalinas is a car-free property. It may come as a surprise that Las Catalinas, an idyllic, walkable resort community located on Costa Rica’s Guanacaste Peninsula, maintains strong ties to Atlanta.

This master-planned, New Urbanist enclave was actually the brainchild of MindSpring founder Charles Brewer, who, along with a handful of business partners, purchased the property in 2006 with visions of a dense, tight-knit neighborhood overlooking its picturesque mountainous locale.

More than 10 years later, the eco-sensitive seaside community has blossomed into its own, thanks to smart development that has not only preserved the natural terrain but also allowed its newest additions, such as a Beach Club, a mixed-use village and an adults-only hotel villa, to embrace its canopied surroundings.

Because of Brewer—and the family-friendly community he created, in which hospitality is not just top of mind but also a way of life—a handful of Atlantans have also designated Las Catalinas as their international getaway of choice (as have residents and visitors from across the world). Just a four-hour flight (and 40-minute drive, now on paved roads) away, the travel time is practically on par with a road trip to Sea Island, Georgia, or Rosemary Beach, Florida.

Interior designer Beth Webb is one Atlantan who has known the property intimately since its inception, having designed several homes on-site (Charles and Ginny Brewer’s included). Most recently, Webb was enlisted by Atlanta couple Scott and Chris Polhemus (and their friends, David and Sue Watson and Chris and Sue Haaland) to create a breezy and bright retreat that would not only accommodate multiple families but also stand up to the wear and tear of beach life (and, eventually, the rental market).

The catch? The owners were actually combining a pair of adjacent houses—one by architect Michael G. Imber and the other by Neil E. Hoyt—doubling the capacity to seven bedrooms (with two master suites) and uniting them using a private plunge pool and covered cabana as a bridge.

It was largely the designer’s experience working on-site with local craftsmen and Nicaraguan laborers—designing cabinetry, doors and windows from local woods and pouring concrete countertops and tiles, with a language barrier to boot—that proved invaluable to the Polhemuses, who wanted to move quickly to have the house ready for winter’s high season.

The ability to design in such a turnkey fashion on an international level, however, did not come overnight, says Webb, who recalls arriving on the property during phase one, when Las Catalinas was still just “sand and the jungle.” Lessons picked up through the years, for instance, include finding workrooms in San José, Costa Rica’s capitol, to build and upholster furniture (and locating textile designers and artists for unique linens, art and accessories), all in the name of eliminating the need for expensive shipping containers and pesky customs limits. “We’ve cultivated our resources and workrooms to where we don’t have to do so much Stateside anymore,” Webb says.

Ultimately, the homeowners’ design directive was to keep the palette clean, bright and breezy (and within the context of its tropical environs), which Webb accomplished with a refined blue-and-white palette, rounding it out with luscious texture from woven chairs and rugs and striking handcrafted accessories.

A designer known for her chic but streamlined approach, Webb says the ultimate challenge was creating seating arrangements suitable for gracious living in a home with such narrow spaces. Extending the main dining areas to both an outside terrace and the cabana in the pool deck was one way to maximize the property’s indoor-outdoor connection and take advantage of Costa Rica’s temperate climate. It also allowed her to make the formal living area feel larger than it is, thanks to doors that open to those breeze-filled spaces on either side.

“Any time we are designing for resort living, we are thinking about the ergonomics of space and storage, and how that room will work to be the most comfortable for the homeowners and their guests,” says Webb. In a house that accommodates as many as 18 but feels just as intimate and attractive for a party of two, this was no small feat. Equal parts engaging and fun, the residence is not unlike Brewer’s overarching vision for the community of Las Catalinas

Who needs a vacation?

One Response to Vacation Vibes via Atlanta Homes & Lifestyles