One of the very best parts of my annual trip to Los Angeles for LCDQ Legends is getting to know other designers and meeting new friends. This year was no exception.  I had the pleasure of making many new friends and acquaintances of various design talents.

One up my main objectives other than going to all the fabulous events was to see The Broad Museum in downtown LA (more on that soon). Another designer joined us on this excursion with whom I was familiar but did not know, Elizabeth Eakins. She is renowned in the design world as the creator of exquisite handmade wool rugs and textiles. I thoroughly enjoyed getting to know fellow animal lover, Elizabeth, and was completely enamored with the story of her farm and how her business came today. On my web wanderings this week I came across the beautiful farm in Kansas that I had been so inquisitive about.

Enjoy a look inside this beautiful life that Elizabeth and her husband have created. I can promise you she is just as lovely and interesting a person as is their picturesque Kansas home.

When she landed in New York City in the late 1970s,  Elizabeth Eakins, a Pittsburgh native and Berkeley grad, had simple expectations. “I thought ‘I’ll just be the rug lady—the person that people want to come to and get rugs, ’” says Eakins, who learned to weave when she was 11 years old. She happily envisioned a life where she would provide genuine service making useful and enduring handwoven textiles out of natural fibers. She anticipated that this path would be gratifying and that the world would be a warmer and softer place. And it was.

Then some 25 years into it, she bought a farm, upped the ante and transformed her entire life.

Nordeen Farm occupies 240 acres in the historic Tallgrass Prairie of Kansas. The topography is composed of rolling hills, creek beds and open pastures. Eakins lives and works here with her second husband, Jerry Wigglesworth, a lawyer who went back to school to study farming. The two met at a conservation fundraiser, and after a 14-month courtship marked by long hikes and lots of conversation, tied the knot. Together, with the help of three Great Pyrenees, they nurture 100 Border Leicester sheep and grow the crops to feed them.

Though sometimes idyllic, pastoral life is rife with drama. “Nature is the driving force behind everything, and nothing is a given, ” says Eakins, describing their constant state of preparedness for the next storm, the next predator or the next lamb. In lambing season, Eakins and Wigglesworth split middle-of-the-night shifts to bottle-feed newborns who’ve taken up temporary residence in their kitchen. Though the challenges are great, the rewards are greater, and the couple is committed to raising unstressed, healthy animals with extraordinary fleece. “It’s like having 100 children, ” says Eakins, who relishes the responsibility but also seeks respite every now and again.

Thankfully, her version of sanctuary is accessible in the 1876 limestone farmhouse. Originally built by Swedish brothers as a two-room/two-story house, previous owners expanded the overall footprint before Eakins and Wigglesworth made their mark, taking down walls, painting the oak floors gray and whitening the overall space so that light could move freely about. Save for a few pops of color from Eakins’s signature hand-printed textiles and handwoven rugs or perhaps a plein air painting, a minimal, soft palette dominates and keeps the warm prairie light at bay.

In the farmhouse, rooms are ample but not cavernous, and furnishings, culled from Wigglesworth and Eakins’s inventories, are pretty but not precious. The Scandinavian influence is strong, a result of Eakins’s personal history au pairing in Norway straight out of high school and exploring the entire region afterward. Eakins has amassed a collection of fine Swedish antiques, but has also painted some “junk” to meld with the style. The round coffee table, for example, was a brown oak dining table before Eakins cut it down, refinished it, and turned it into the perfect game and puzzle table for her grandsons.

This timeless aura of calm also presides at the loom house. Just 50 feet from the main house, the newish structure serves primarily as Eakins’s lab. Here, surrounded by the colors and sounds of nature and an occasional NPR podcast, she experiments with new color combinations and weave structure while keeping an eye on the flock. The simple environment, sparsely furnished and devoid of ornament, encourages focus, and Eakins adores this sacred quality. “It’s church-like and predominantly quiet, and I’m very comfortable with that, ” she says.

While Eakins still goes back and forth from her Connecticut studio, Kansas is home. Approaching 60 and fully invested in her brand’s sustainability, she is neither stagnant nor bored, but full of energy and the desire to keep learning. She has a wonderful life partner and a wooly flock that have unwittingly taught Eakins much about herself. Feeling privileged, inspired and grateful, Eakins continues to make textiles from nature’s best and is giving her best back to nature.

A version of this article appeared in the November 2015 issue of Connecticut Cottages & Gardens with the headline: Nature’s Best. At home in Kansas, married couple Elizabeth Eakins and Jerry Wigglesworth, shepherds and croppers since 2002, are hands-on with their flock of Border Leicester sheep. They use a mixture of preventative care and genetic chronicling to achieve superlative fleece. 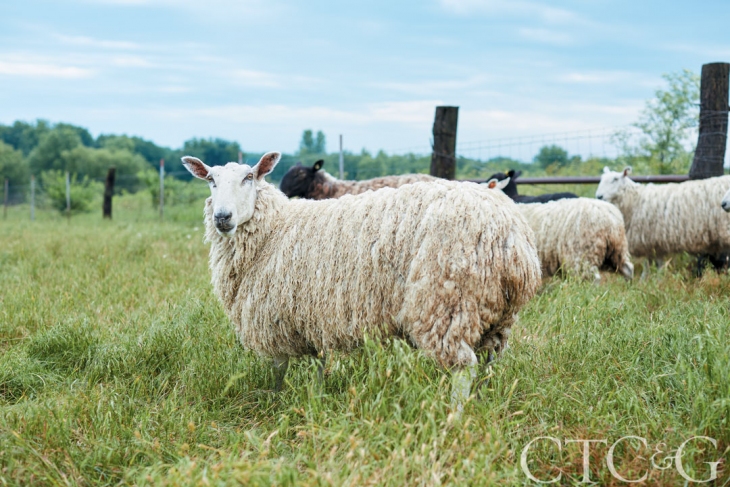 One of Elizabeth Eakins’ prized Border Leicester sheep, whose wool will become one of her handwoven rugs. “Limestone is to Kansas what trees are to Connecticut, ” says Eakins, describing the plentiful hand-chiseled locally quarried stone from which Swedish builders fashioned the original 1846 dwelling. Scandinavian influence continues in the dining room where an antique dining table and chairs from Circa Antiques complement Elizabeth Eakins’s cotton Elkhorn Stripe rug and her own linen upholstery fabrics. The chandelier belonged to Wigglesworth’s mother. Wool, durable and so perfect for dyeing, is Eakins’s longtime favorite fiber. To ensure the most lustrous and strong staple from their sheep, she and Wigglesworth fortify the animals’ diet with minerals and keep them outside year round, safely penned and guarded by three Great Pyrenees. This wool is used exclusively for Eakins-branded Private Reserve, the highest quality rug collection handwoven in her Connecticut studio. 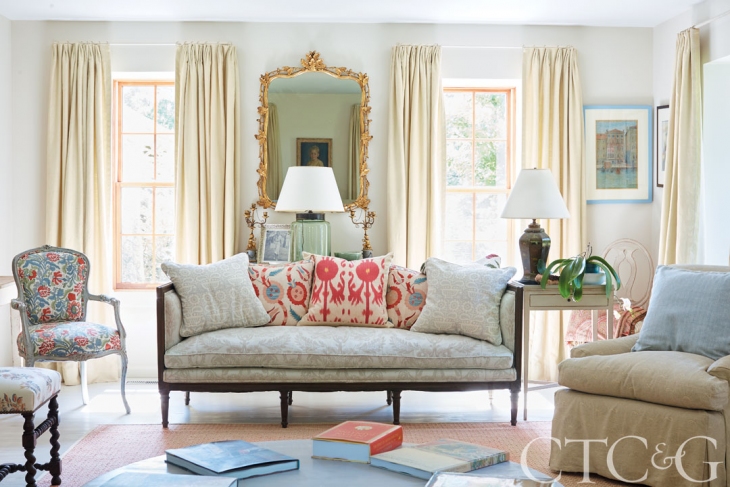 The living room’s pale perimeter is offset by bright Elizabeth Eakins pillows, an antique bergere upholstered with a Brigitte Singh tablecloth and an Eakins rug in melon. A balance is struck between farmhouse ease and provenance with linen slipcovers on a down sofa, antique glass lamps from George Terbovich and a portrait of Jerry as a young boy. Relying on the farm’s plentiful limestone for its foundation, architect Robert Schultzdesigned the loom house in the prairie vernacular style. It houses a creative work space plus a bedroom, bathroom and sauna. An old teak drawing table from Circa Antiques holds work-related materials while an antique wicker sofa with an array of Eakins indigo textiles offers a resting spot. My friend, Ramey Caulkins of Griffin Design Source also happened to do the Legends window inspired by Elizabeth’s craft in her Melrose Ave storefront. Elizabeth and Nathan Turner also hosted a fun book signing for their friends new cookbook, Citrus. It is one to add to your collection ASAP. Are you dreaming of farm life too?

Green Acres is the place for me…