I have long been searching for a particular vintage scarf by Hermès, Les Cheyennes by Kermit Oliver, circa 1993.  It is now mine and I adore it.

I see these scarves as works of art.

This scarf is historic for many reasons. The scarf is titled “Les Cheyennes” but was quickly changed to “Plumes de L’Ouest“. Supposedly the name was changed due to complaints registered by the Native American Nation for which the original piece was named. I am thrilled to have an early original. I have longed to share the interesting story about this American artist that designed this and many other scarves for Hermès.  It is fascinating, inspiring and heartbreaking all at the same time via NPR.

How A Texas Postman Became An Hermès Designer 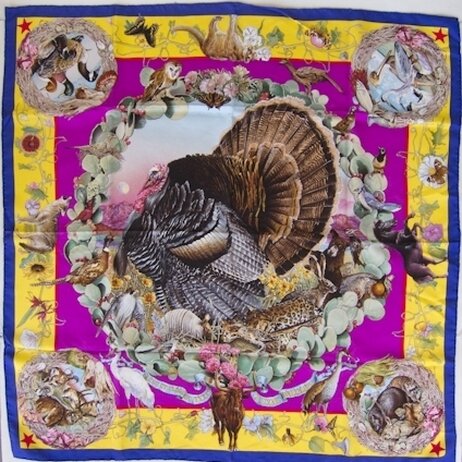 One of Kermit Oliver’s designs for Hèrmes

About a year ago, writer Jason Sheeler was working on a story about Hermès scarves — the elaborately decorated silk squares that can cost as much as $400. He traveled to Lyon, in southern France, to visit the factory, and on his first day there he found an even more interesting story: A French woman threw out a big scarf with a turkey on it and asked Sheeler if he knew Kermit. He didn’t.

Kermit, as it turns out, is Kermit Oliver. He lives in Waco, Texas, and he’s the only American to ever design scarves for Hermès.

Several weeks and many voicemails later, Oliver finally, reluctantly, allowed Sheeler to visit him at home. Sheeler, who wrote about Oliver in the October issue of Texas Monthly, tells Guy Raz, host of weekends on All Things Considered, that he was immediately struck by Oliver’s artwork.

Most of them are portraits of children or farm animals. One huge painting showed a cat sitting on the back of a cow wearing a floral necklace. Another was a portrait of Oliver’s father sitting astride a horse.

Oliver is 70 years old. He wears his mustache trim and neat. And though he’s one of the most important living African-American painters, he just doesn’t understand what the fuss is about. Never mind that he’s the only American artist ever to design a scarf for Hermès — which he’s done 16 times. 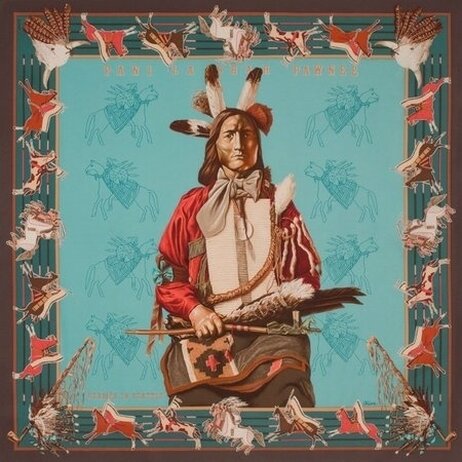 One of Kermit Oliver’s designs for Hèrmes.

Again, he’s also an employee of the U.S. Postal Service.

“He doesn’t believe he can make a living as a painter, ” Sheeler says. “He doesn’t even believe that he’s that good — those are his words. He just likes to paint.

“He works overnight at the post office, comes home, paints a little bit, takes a nap and then does it all over again. He survives on two to three hours of sleep. Eats a sandwich on his break at the post office. He gets a 30-minute break, and then he goes back to sorting mail.”

“I think that he’s a mystery to everyone. I even sometimes … wonder if it’s a mystery to Kermit, because I think he enjoys people” says Shelby Marcus.

Marcus is the wife of Lawrence Marcus, the founder of the legendary Dallas department store Neiman Marcus, which was instrumental in bringing Oliver to the attention of Hermès.

“He’s private, that’s the only thing that I can think of, ” Marcus says. “He has a need for privacy.”

Oliver went to art school at Texas Southern University in Houston in the late 1960s. Almost immediately, his work stood out.

“His art is colorful. He works with very, very, very rudimentary supplies, ” Sheeler says. “He works with acrylic paint that he gets at Michael’s [craft stores]. He works on very cheap watercolor paper. He draws, and then he paints. Oftentimes, he uses his family members in his paintings.” 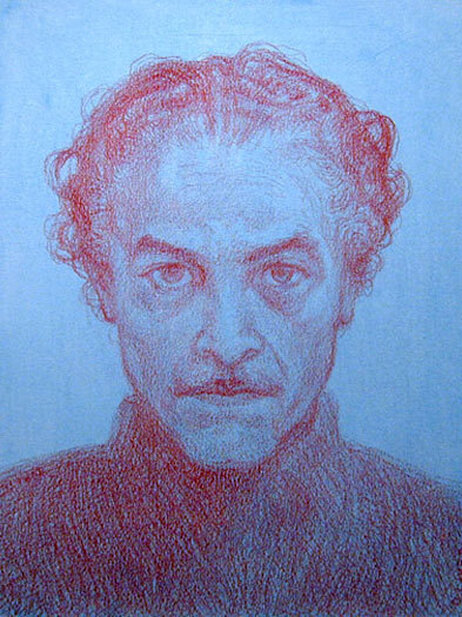 A self-portrait by Kermit Oliver

A gallery in Houston recognized Oliver’s talent and mounted a one-man show of his work in 1970. He became the first black artist represented by a major gallery in Houston. That’s how Oliver first met Shelby Marcus — and later, her husband.

“The Hermès company was looking for an artist to do a scarf with a Southwest theme, ” Sheeler says, “And Lawrence Marcus said, ‘You know what? I know the guy. I’ve got the guy for you.’ “

“The thing that intrigued me and made me think of Hermès, for using Kermit’s talent was the fact that Kermit tends to design from the outside in, ” Lawrence Marcus says. “In other words, he designs the frames of the pictures that he’s painting. And that’s the way Hermès has chosen its path and it just fit in to what Kermit was doing.”

By this point, Oliver’s work was selling for tens of thousands of dollars. One of his paintings sold for more than $70, 000. And all the while, he shows up at the post office in Waco to sort mail.

Oliver’s story took a tragic turn in 1998 when his youngest son, Khristian, was sentenced to death for beating a man to death during a home robbery.

Oliver tried, in vain, to have his son’s sentence commuted. Hermès and the Marcus family helped him set up a legal fund. He spent hundreds of thousands of dollars on lawyers, but the sentence stood. In November 2009, Oliver and his family watched as Khristian was put to death by lethal injection.

According to people who know Oliver, he was never the same after that.

“He became even more reclusive, ” Shelby Marcus says. “I believe he had some searching to do within himself about his religion, because he was so crushed.”

“There was no common thread within his family that would lead one to believe that Khristian wouldn’t have taken the same path as the other children, ” she says.

I am so moved and mesmerized by the story of this artist.

I think this one is my next vintage Kermit Oliver / Hermès purchase, Pani La Shar Pawnee.