Women on the Verge via The Wall Street Journal

My husband brought home his Wall Street Journal knowing I would love this article since I have been featuring female artists all year on my blog. Women may be one the verge of getting proper recognition in the art world. It is about time….

Women on the Verge

A lady in a bonnet is shaking up the art world.

When "After Lunch, " Berthe Morisot's portrait of a doe-eyed woman, sold for $10.9 million in February, it set a record as the most expensive work ever sold by a female artist at auction. It also helped power a wave of interest among collectors and dealers looking to identify undervalued female artists. 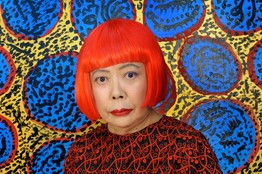 YAYOI KUSAMA: The 84-year-old is the top-selling living female artist of all time, fetching $118 million total at auction.

A woman's signature in the bottom corner of a painting has long spelled a bargain—men in the same artistic school or period can fetch more than 10 times the price of a woman's best sale. While an age-old debate rages over whether talent, sexism or lack of promotion has held many women out of the art world's boys club, everyone agrees that prices for female artists have always lagged behind those of their male counterparts.

Today's flourishing art market—marked by last year's record-setting sale at auction of Edvard Munch's "The Scream" for nearly $120 million—has lifted prices for male and female artists alike. As the supply of great pictures diminishes, more collectors are priced out of blue-chip works and are combing the market for previously overlooked names. A number of highly regarded women artists are seeing their prices rise as a result.

"Remember 'plastics' from 'The Graduate'? It should be 'women, ' " says Tony Podesta, the Washington lobbyist who is one of a handful of collectors aggressively buying work by women artists.

Auction experts and collectors are anxious to see how three Morisot paintings will sell next month during Impressionist and modern sales in New York, two atSotheby's BID +2.09% and one at Christie's.

"Whereas before we looked at female artists as the land of opportunity, with prices like these, collectors say the window is closing for gender-specificity bargain buying, " says Gabriela Palmieri, a senior vice president and contemporary-art specialist at Sotheby's. 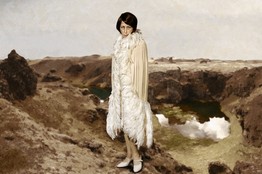 CINDY SHERMAN: In 2011, the artist was the auction world's highest-priced photographer, male or female, with a $3.9 million sale. Here, the artist models in an untitled portrait.

Spanning centuries and a wide variety of styles, work by women is hardly a cohesive market category. Still, some collectors eagerly seek out female artwork.

Prominent women like Wal-MartWMT +1.46% heiress Alice Walton, pop queen Madonna and songstress Barbra Streisand have long collected work by women. Barbara Lee, a national activist for women in politics, has filled her collection almost entirely with work by women partly to support artists she believes are underrepresented by museums and galleries. She recalled visiting Louise Bourgeois's studio in the early 1990s. "It was filled with sculpture from every period of her life—no one had purchased it, " says Ms. Lee.

Others have less-altruistic motives. "A lot of collectors look for undervalued groups of art, and women could easily be considered the last big group, " says Michel Witmer, a New York collector and board member of the European Fine Art Fair.

Dealers and auction experts are using several tactics as they scour the market. One is to find female artists whose works, backgrounds or artistic movements mirror those of prohibitively expensive male artists. These artists include: Joan Mitchell, who worked in the shadows of Willem de Kooning and Jackson Pollock; Natalia Goncharova, one of the turn-of-the-century Russian artists led by Wassily Kandinsky; and Agnes Martin, who forged a path in a male-dominated period led by minimalists like Donald Judd.

Others track female artists whose works have hovered just under $1 million at auction, expecting them to pop into seven figures. Among those attracting attention: conceptual artist Sherrie Levine, known for appropriating photographs by artists like Edward Weston and Walker Evans; and Barbara Kruger, who plasters black-and-white photographs with loud slogans. Both their prices have been dwarfed by the multimillion-dollar sums fetched by fellow contemporary artists like Richard Prince or Christopher Wool.

Another contender: Helen Frankenthaler. There's some debate over the merits of the late abstract expressionist's work compared with those of the men who came before her—like Pollock, whose biggest auction sale topped $40 million—but collectors have shown they're ready to bet on her. Frankenthaler's auction record is just under $1 million, but her early work was recently featured in a show at New York's Gagosian Gallery, where a canvas sold privately for $3 million, according to a gallery official.

The evolution in the market for Joan Mitchell's work illustrates how collectors have recently "discovered" an artist long in the shadows of her male counterparts.

Mitchell, the late Chicago-born painter known for splattering strokes and bold colors, operated just outside circles of older abstract-expressionist peers like de Kooning and Pollock. In 1951, she exhibited alongside them in New York, but by the 1960s she had exiled herself to France.

In 2006, as the art market boomed, a 1970s de Kooning sold for $27 million at Christie's. A Mitchell work fetched $2 million, a big sum for the artist at the time, but one that suddenly had the whiff of a good deal in the Christie's salesroom. New York art adviser Abigail Asher remembers the scene: "A client turned to me and said, 'Wow, doesn't that seem inexpensive?' " she recalled of the collector, who had just bought a Mitchell privately earlier that week.

By 2011, Mitchell's market had climbed as hedge-fund managers and other trophy hunters pegged her work as a good investment. Ms. Asher recalled chasing a Mitchell canvas past its $6 million high estimate against another bidder at Sotheby's. The piece, a large-scale canvas in a riot of colors, sold for $9.3 million—her highest sum ever at auction. Ms. Asher, who lost out, slumped in her seat after the hammer fell: "It was the feeling of: 'The cat's out of the bag.' "

Last year, Mitchell's canvases were the two most expensive works by any woman artist sold at auction, according to auction database Artnet. Her work now hangs in museums around the world, including Ms. Walton's Crystal Bridges Museum of American Art in Bentonville, Ark. A 1958 Mitchell painting will be on the block next month at Christie's.

A number of theories exist for why women have languished in the art world's bargain basement. Experts point to the smaller supply of work by women from certain periods—after all they're called Old Masters, not Old Mistresses—which limits the frequency of sales and holds down prices. Women also are underrepresented by major museums, where purchases and exhibits boost prices. Famous artists like Georgia O'Keeffe and Frida Kahlo do appear in museum shows, but the permanent modern art collections of most major institutions are comprised largely of work by male artists.

Others say women haven't marketed themselves as well as men. "Male artists are much more pushy and power-related, " says Eva Presenhuber, a Zurich-based dealer who noted she recently threw a toned-down party for the artist Karen Kilimnik because the artist doesn't like to promote herself with splashy events.

Indeed, the upper echelons of the art world still belong to men: All of the top 100 works ever sold at auction were created by male artists, and fewer than 3% of auctioned works over $1 million last year were by female artists, according to Artnet. No living woman has cleared $10 million at auction to date, compared with scores of men.

One reason Morisot took off, experts say, is because she and artists like Mary Cassatt have styles similar to those of famous male painters of the period, in this case Manet and Renoir. They also have recognizable brand looks that are easy to live with. "It's no coincidence that the art you see reproduced in doctors' waiting rooms is [their] type of Impressionist work, " says Philip Hook, a senior specialist in Sotheby's Impressionist and modern art department.

Morisot and Cassatt were prolific artists, but most of their work is ferreted away in museums, making those paintings that do crop up on the market highly sought-after.

In a packed Christie's salesroom in London last February, the Morisot canvas, "After Lunch, " sold for roughly three times its high estimate after a protracted back-and-forth between two telephone bidders from Russia and the U.S. The piece is believed to have gone to an American.

The market prizes other female artists because of artistic styles and cultural sensibilities that translate well over time. Tamara de Lempicka, a Polish-born artist with a booze-and-party-fueled lifestyle, moved to Hollywood in 1939 and became a wild fixture on the movie-industry scene. Her Art Deco paintings, brimming with men in tuxes, busty blondes and lesbian trysts, draw famous admirers today—and have reached record auction prices in recent years. Sotheby's will feature a moody Manhattan skyline by the artist during next month's sales.

Madonna, who owns at least two de Lempickas, has collected her for decades and considers her work a source of inspiration, a spokeswoman confirmed. When the singer's "Vogue" video came out in 1990, featuring Madonna's de Lempickas in the background, it sent a frisson through auction houses and art galleries. For years later, whenever anyone had a de Lempicka to sell, the reaction was always the same: "Everyone said, 'Oh, offer it to Madonna, ' " says David Norman, Sotheby's co-chairman of Impressionist and modern art world-wide.

Other avid collectors include Barbra Streisand, who was first drawn to the artist's paintings in the 1970s when she was building a house in Art Deco style. "I found Lempicka's work to be so original, " Ms. Streisand said in an email, praising the artist's style and technique. "The fact that she was a woman artist made her even more intriguing."

The gender gap narrows within smaller niche markets like photography. Cindy Sherman, a 59-year-old chameleon who spends years planning portraits of herself in various personae, briefly held the title as the auction world's highest-priced photographer, female or male, in 2011. An image of herself splayed across a brown linoleum floor sold for $3.9 million. Ms. Sherman's works, which sold for $1, 000 at her long-standing gallery Metro Pictures in 1981, now typically fetch $450, 000 at the gallery and are collected by art-market heavyweights such as Los Angeles billionaire Eli Broad and Christie's owner François Pinault.

An older generation of women artists sees a much different art market today than the one they grew up with. Pat Steir, a 74-year-old New York artist who pours paint down her monumental canvases, recalled one summer in 1964 visiting a friend whose father was an abstract painter. One of his guests was Mark Rothko. Ms. Steir approached him, explaining that she had just gotten out of art school. "I said, 'Mr. Rothko, you're such a great artist, I admire your work so much, ' and he said, 'You're a pretty girl. Why aren't you married?' "

Ms. Steir's art now hangs in most major museums across the U.S., including the Metropolitan Museum of Art.

A version of this article appeared April 19, 2013, on page D1 in the U.S. edition of The Wall Street Journal, with the headline: Women On The Verge.